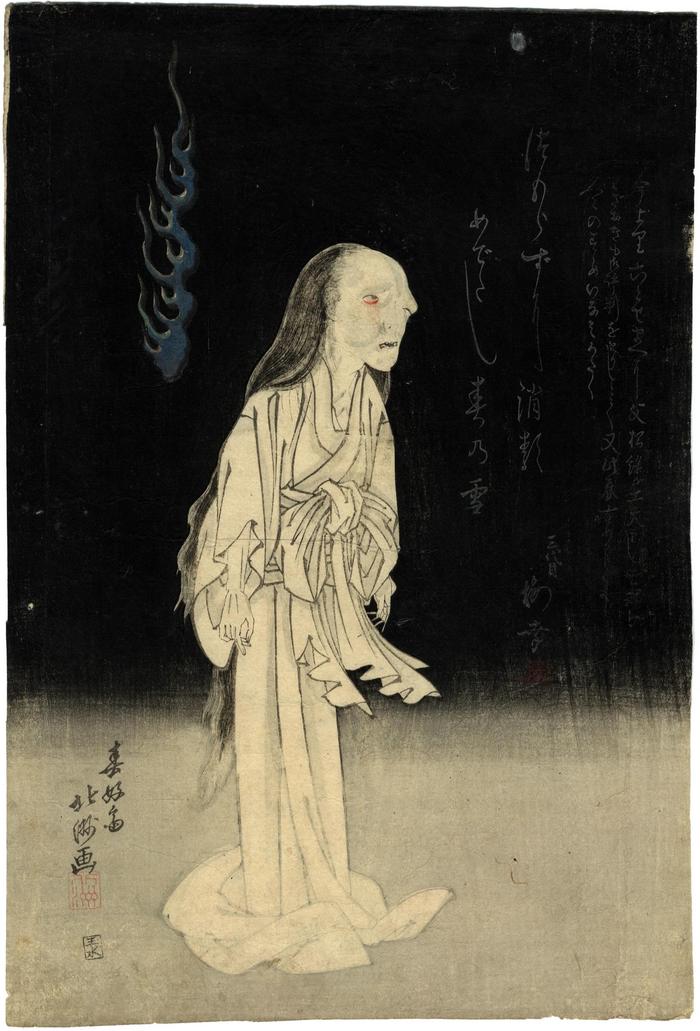 "According to a critique of the 1826 Osaka performance of the play Irohagana Ghost Stories at Yotsuya (Irohagana Yotsuya kaidan) the sight of Onoe Kikugorō III (1784-1849) as the hideous Oiwa, descending headfirst from the ceiling as if from the sky, provoked a member of the audience to shout, "Her face looks like a bloated octopus!" The local artist Shunkōsai Hokushū (act. 1800-30) memorializes the effect as if he were a courtroom illustrator: Oiwa's swollen, misshapen head hangs heavy on her emaciated frame, her shoulders slump and her thumb picks nervously at a finger... As is typical of Japanese ghost pictures, she has long, disheveled hair, wears a white gown and has no feet. The flame behind her is a shinka, or "spirit flame," that represents a sort of supernatural manifestation that accompanies or stands in for a ghost. The plain background and the swath of black across the top of the print highlight the eerie presence of the ghost, but the silver-printed poem attributed to Kikugorō, suing his poetry name Baikō, assures the viewer that eventually she will leave and go back where she belongs: "It doesn't stay, just melts away, fortunately: spring snow."

"At the end of the play the ghost of the murdered Oiwa follows her husband to his mountain hideaway. There she haunts him until he is driven mad with fear and almost welcomes Oiwa's brother, the avenger. The inscription by Kikugorō III relating to his role in the play reads:

Six years ago my father Shōroku's contrivance of a wicked spirit was well received, and although this is neither new nor proper to the season, I could not refuse the many people who insisted on my performing it.

Happily it does not stay, but disappears: spring snow. -- Baikō

First staged in July 1825, Yotsuya Kaidan appeared at the Nakamuraza Theater in Edo (the former name of present-day Tokyo) as a double-feature with the immensely popular Kanadehon Chushingura. The play was incredibly successful, and forced the producers to schedule extra out-of-season performances to meet demand.

The story tapped into people’s fears by bringing the ghosts of Japan out of the temples and aristocrats' mansions and into the home of common people, the exact type of people who were the audience of his theater.

This print commemorates a performance at Kado-za in the first month of 1826.

Often in kabuki theater ghosts are represented by figures in white robes, but not always. The white robe is similar to a katabira, a summer robe, but it is referred to as a kyōkatabira (経帷子). After a person died their body was washed, often by female family members, and prepared in a certain way. At the end, whether Shintō or Buddhist, they were dressed in a white garment to start them on their next (spiritual/afterlife) journey. "Three women of the community followed strict rules in making the death robe. They measured the cloth by hand instead of with a ruler, tore the cloth instead of cutting it with scissors, sewed the seams so that the stitches were visible, left the ends of the threads unknotted, and made no collar. Making the garment different from the clothes worn by the living emphasized the contrast between life and death..." That is why we see the figure of Oiwa in a loose white robe in this print.

The text on this print starts: "今ょり六とせまへに父松緑が工天せし亡魂のわざおきも..."

4) In a large black and white, full page, reproduction in The Theatrical World of Osaka Prints by Roger Keyes, p. 109.

5) in color in Catalogue of Japanese Art in the Náprstek Museum published by The International Research Center for Japanese Studies: Nichibunken Japanese Studies Series 4, 1994, p. 142.