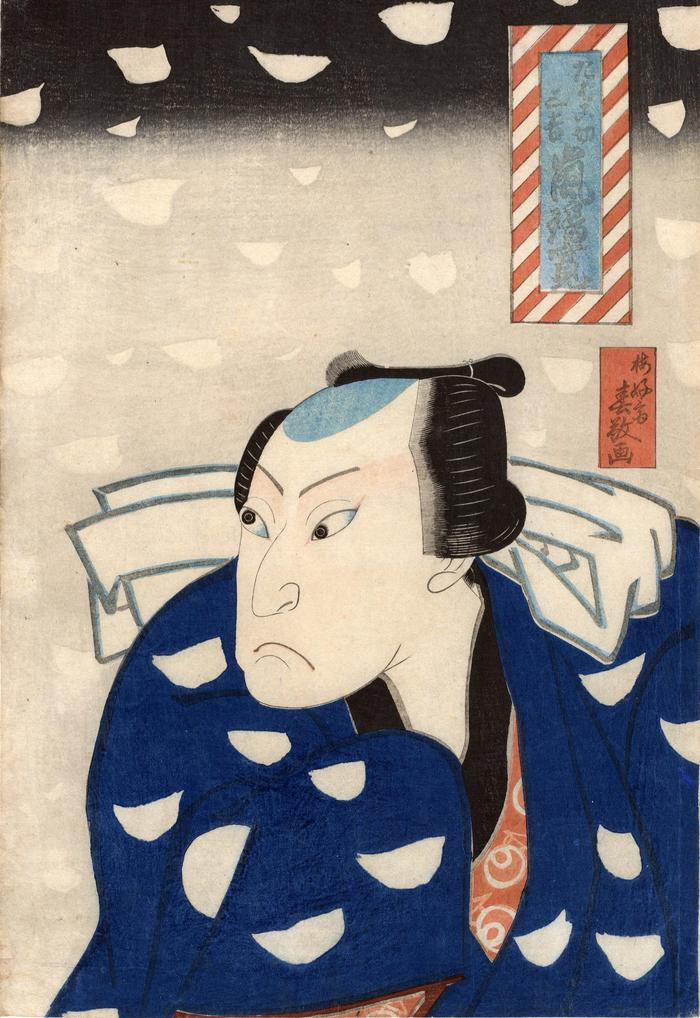 "The play Keisei somewake tazuna (A courtesan's reins dyed in different colors: けいせい染分總), written by Nagawa Harusuke and the superstar actor Nakamura Utaemon III (under his pen name Kanazawa Ryûgyoko), premiered in 1/1822. It was adapted, as were quite a number of other plays, from Koi nyôbô somewake tazuna (Love and a wife's reins dyed in different colors: 恋女房染分手綱) first staged in 1751. The earlier play was itself a revision of Chikamatsu Monzaemon's Tanba yosaku matsuyo no komuro bushi. It has been reported that the accomplished dramatist Harusuke became so enraged at what he believed to be a poorly constructed play that he attacked his co-writer Utaemon with a knife.

The story involves a shop owner and his older brother who stop conspirators from stealing the treasures of the Yurugi daimyô family, and features Sankichi, a tabakokiri (tobacco cutter: 煙草切), who emerges as the hero of the drama."

The above information is quoted directly from Osaka Prints.

Almost nothing remains of the artistic career of Shunkei. Very few print examples are known, and in fact the only entry in the most comprehensive Japanese ukiyo-e encyclopedia (11 volumes) is about this color woodcut: “Arashi Rikan as Sankichi,” the “tobacco-cutter” in the kabuki play “Keisei somewake tazuna” (usually translated as A Courtesan's reins, dyed in colors) , performed at the “Naka Theater” in Osaka in the “first month of 1834.” That reference source also provides the information that Shunkei was a pupil of the artist Hokushū... who had himself designed prints for the same play when it debuted in 1822. The drama was co-authored by the celebrity actor Nakamura Utaemon III (1778-1838) who, naturally, starred in the first performance as the hero, Sankichi.

In the performance of 1/1834 it was the actor Arashi Rikan II (1788-1837) who starred as Sankichi, the tobacco-cutter who helps to stop conspirators plotting to steal treasures from a samurai family. Rikan II, who was called “Metuku,” i.e., Eye virtue, for his famously large, beautiful eyes, excelled at playing romantic heroes as well as women of all ages. Although he lacked dancing skills (especially important for playing female roles) by 1832 he has earned the highest rating in published kabuki critiques, the coveted ranking of “ultimate-upper-upper-excellent” actor.

This print from the Lyon Collection is published in color in Modern Printmaking: A Guide to Traditional and Digital Techniques by Sylvia Covey in 2016, along with woodblock images by Mike Lyon himself.